I have been playing the clarinet since the mid 1980’s, and whilst other instruments have come and gone in my life, this is one that has remained! I now not only enjoy still playing this instrument, but also offering lessons for the clarinet. Sutton in Ashfield is one of the areas I cover.

If the clarinet could be described as a personality, it would be a mellow and versatile character that can sometimes be at the bottom of many jokes (Green Clarinet), but could also hold its own if it came to a fight!

The clarinet is not one of the simplest of instruments to learn, but once you master the sound production it has a wonderful warm mellow sound. Where some instruments may be self taught, the clarinet really isn’t one of them. There are many factors that are needed to produce a good tone and reed care and knowledge is as important as the care of the instrument itself.

One of the most well known pieces of popular music for the clarinet could be Stranger on the shore by Acker Bilk, but the clarinet has been used widely in orchestral works, blues, jazz, Dixieland– every genre of music there is. You may have seen the television series A Victorian Kitchen Garden, the main themes in this are played by a Clarinet and a Harp. Other famous clarinettists are Artie Shaw, Benny Goodman, and Woody Herman. A more recent young clarinettist is Julian Bliss from the UK.

For me, the most wonderful thing about the clarinet it the sound, and the fact that you can choose to play an eclectic a mix of music as you like. It sounds amazing as a solo instrument, and equally as good when let loose to improvise and play as part of a band or orchestra.

Did you know: When she was at school, Julia Roberts played clarinet in bands? 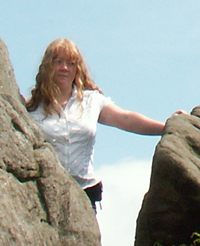